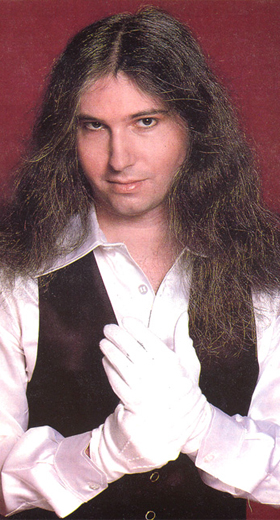 Swan's Introduction: The phrase "Turn around bright eyes" is a well-known Steinman lyric, alluding to one of the most charged emotions that could ever be uttered, sung, cried, screamed or whispered. Those unfamiliar with Steinman will probably have come across this lyric in the Bonnie Tyler-sung "Total Eclipse of the Heart", the epic story of the darker side of love that totally eclipses all who have heard its biting truth. However, seasoned 'Steinmaniacs' will no doubt realise this phrase originates from the first song of this timeless epic 'the Dream Engine' and it is here, throughout the play, we see its true and complete message in its raw and most powerful form.

What is this message, what does it mean? Hear the Songs of the Dream Engine, delve in the world of Steinman and come and live in Steinmania, where there are no limits and there are no regrets...

Jacqueline Dillon's Introduction: During Jim Steinman's final year at Massachusetts' Amherst College, as fulfillment of an Independent Studies project, he conceived, wrote and scored a rock -n- roll musical called The Dream Engine. In the spring of 1969, Steinman starred in an explosive production of that piece which was staged, directed and choreographed by Barry Keating, who also electrified the role of the oracular Historian. The Dream Engine was met with a great deal of attention...both of the positive and negative variety.

Joe Papp, the innovative helmsman of The New York Shakespeare Festival, optioned immediately for professional rights to stage the work. The majority of the show's several thousand witnesses were aroused and intrigued. A few were unable to handle the power of the show's vigorous, unashamed and explicit content and protested the one aspect of the work that should have frightened and offended them least - the physical nakedness. Why wasn't it the terrifying way The Dream Engine exposes mankind on the inside that scared them? Or maybe it was? In any case, that five night, two weekend event simultaneously marked the end of Jim's college career and the beginning of a new one as a musical and theatrical vanguard.

As theater The Dream Engine is highly illuminating, exceptionally poignant, extremely biting and, at times, extraordinarily humorous - characteristics present in Steinman's entire body of work. Still, within the two acts of The Dream Engine, you'll find much more than just stylistic similarities to what Jim produced later. It's clear that The Dream Engine has fueled everything that has come after it and is also the foundation which Steinmania, and the philosophy associated with it, is built on. Here we see, in a raw and early incarnation, the special set of mind that makes Jim Steinman the kind of man and writer he is - a person capable of giving us, at the same time, a most vivid sense of the qualities of things and an equally compelling revelation of his own feelings. Profoundly and particularly in The Dream Engine, we experience the force of Steinman's conviction and his exaltation before things. Strip away from The Dream Engine the aspects that were influenced by the social climate of the day and you'll see that, as with all of Jim's art, it's inspired by his great hope for humanity and an urgent, irrepressible need to communicate that hope in an effort to educate our spirit, unloosen our feelings and prove to us that there can be a life after birth.

Preface to the Dream Engine

Do you dare dream
the dream that started it all?

The stage is set as follows: there is a large black disc in the center. It extends over almost the entire playing area. Up front, stage right and left are two elevated platforms. All the songs are sung "out of the action," i.e. sung by SOLOISTS, like rock "arias" on the platforms, while simultaneously on the disc, the strongly choreographed or "directed" dances and rituals are performed. These rituals cannot be loose or ragged or have anything to do with pop dance steps. Neither can they be "dancy," i.e. completely part of the world of calculated deliberate modern dance. They must convey a ceremonial quality and epic texture...strenuous, strong, muscular, sensual and extreme. Never cute. The best examples I can think of are the works of Robert Joffrey, Grotowski, and perhaps, most strongly, the richly choreographed theatrical textures that Peter Brook created for "Marat/Sade" and Seneca's "Oedipus." There must be physical intensity and power on stage capable of equaling and finally merging with the power and ritualistic drive of the rock music. The work is, in essence, a rock opera, despite the fact that it is not all music. Music runs behind and weaves through almost all the scenes, and in the next draft I am preparing, the most important changes have to do with making the entire piece more operatic, more totally ritualistic and ceremonial; the dialogue should be much more incantation-like...more chants, visions, deliriums... Ideally, I would like the work to unite the "music-drama" structure of Wagner's opera with the more immediate political and social bite of Brecht-Weill's "Mahagonny," still retaining a modern equivalent of "Mahagonny's" epic scope... and adding, especially in keeping with the nature of rock, elements explored by the Living Theater, Grotowski, Joseph Chaikin, and Peter Brook... all of whom have created astounding works which, for me, push the theater of today right to the edge of magic - "religious" and ritualistic theater for the future, capable of awe and holy immediate power: to arouse and then to cleanse.

I can't help thinking that Artaud would have adored rock and found in its sources and textures a true example of "Theater of Cruelty," a truly new an paradoxically primitive but electronic Church. It seems to me that rock is now the perfect musical tool for welding together the theatrical styles mentioned before...A new form of music drama based on rock's inherent theatricality and immense power of communication and a new form of Brechtian "epic" theater and a new form of Artaudian ritualized theater of cruelty..."The Dream Engine" is certainly far from achieving this complete synthesis now. I wouldn't presume to put it in the company of Brecht, Wagner or Artaud. But I wanted to indicate the direction I've tried to make it go, and also to suggest the nature of the staging when it was first performed in America for 10 performances at colleges on the east coast...

The primary force to creating the visual quality of the work is an extensive use of projections, never easy multi-media or strobe effects, but more the "visionary" work best exemplified by Wieland Wagner in his Bayreuth productions and Robert O'Hearn in the Metropolitan Opera's production of Strauss' "Die Frau Ohne Schatten," or the N.Y. City Opera's work in Boito's "Mephistopheles." In essence, what I'm trying to say is, the nature of the lighting has more to do with the stylized textures of epic opera than the whining, bouncing, clumsy stuff of discotheques.

In summary, the texture used in staging the entire work was derived primarily from three really "inspirational" sources: the mythic density of Wagner's Bayreuth work ("the hypnotic force of an heroic hallucination, taking place in a strange god-inhabited world of the primeval future!")...the unique and prophetic writings of Antonin Artaud and the realizations of so many of these visions, and more, by Peter Brook in his work and the book by Mr. Brook, "The Empty Space." - J.S.